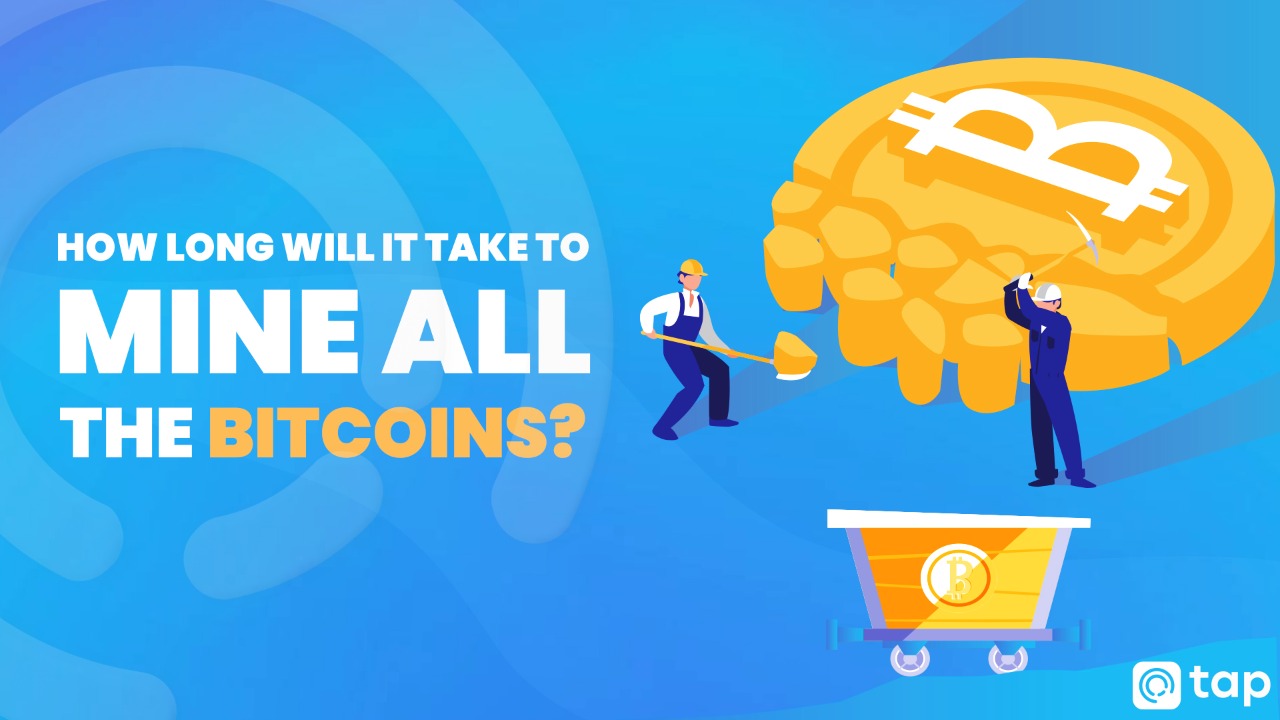 How Long Will It Take To Mine All The Bitcoins?

How Long Will It Take To Mine All The Bitcoins?

The age old question, when will all the Bitcoins be mined, has been on everyone's mind at least once and today we are going to go over exactly how long it will take to mine all Bitcoins.

There are a few chapters we need to cover first. For one we need to look at Bitcoin’s total supply, followed by the halving mechanism that Satoshi Nakamoto himself implemented, and then we can set about working out when the last Bitcoin will be mined. Sound good? Dive in and join us for the ride.

When Bitcoin was first announced to the world in a whitepaper in 2008, the public was introduced to a new kind of monetary system. Unlike the fiat system that all countries operate off, these cryptocurrencies presented a digital answer that could navigate value around the world in seconds and didn’t rely on any banks, financial institutions or governments to operate them.

Created as a response to the 2007 - 2009 global financial crisis, the mysterious entity known as Satoshi Nakamoto chose to also make the currency deflationary. Unlike its fiat counterpart, Bitcoin was created to increase in value over time, proving to be a viable store of value. Written into its code was the fact that only 21 million Bitcoin will ever exist, ensuring that the new age currency would have a deflationary nature to it.

Of the 21 million BTC that will ever enter circulation, as of May 2021 a total of 18.7 million have entered the market. This accounts for roughly 89% of the total supply of Bitcoin, which might lead one to believe that the end is nearer than we think. However, think again.

Another ingenious idea that the great Satoshi Nakamoto incorporated into the nuance payment system is the halving mechanism. Through the use of blockchain technology, every 210,000 blocks, or roughly four years, a halving mechanism is automatically implemented into the system which reduces the mining rewards (also known as block rewards). This part gets a little technical, so let’s recap.

This thereby controls the amount of new Bitcoin entering circulation. As fiat currencies are printed and minted, cryptocurrencies are mined. The Covid-19 pandemic saw many countries print more money to distribute to its people and in turn boost the economy, however the long term effects of this can be devastating due to rising inflation and the decrease in value on a global scale. Bitcoin, however, due to the controlled nature of the deflationary currency is set to increase in value.

How Long Will It Take To Mine All Bitcoins?

Now that we’ve covered the basics of Bitcoin’s total supply and the halving mechanism controlling the influx of coins entering into circulation, it’s time to establish how long it will take to mine all Bitcoins.

Based on the table below, we can see exactly when the next halving is due to take place (in 2024), when the miners reward will halve again to 3.125 BTC. While the amount of BTC received for mining a block decreases, bare in mind that the value undergoes significant increases. After that the next halving mechanism is due to go into effect in 2028, followed by another in 2032.

As you’ll notice, the halving in 2032 will be responsible for mining the last chunk of the 99.21872% of the total BTC ever to exist. This leaves 0.78128% remaining. Due to the nature of the halving mechanism, it is believed that the very last Bitcoin will only be mined in 2140.

In answering the question on how long it will take to mine the last Bitcoin, the answer is an estimated 119 years. Which, facing the cold hard truth, we are unlikely to witness in our lifetime.

Considering that the cryptocurrency has witnessed gains taking it from $0.003 to roughly $55,000 in just over a decade, consider what the Bitcoin price might be in the next ten years, or twenty, or 100? Whether you’re buying to invest or buying to trade, Bitcoin has proved time and time again to be a worthy investment. Consider bagging yourself some BTC with the convenience of the Tap Global app. The app allows you to not only buy the original cryptocurrency, but to sell, store and spend it as you please too. If you’re wondering when the last Bitcoin will be mined, it’s probably time to tap into the future.