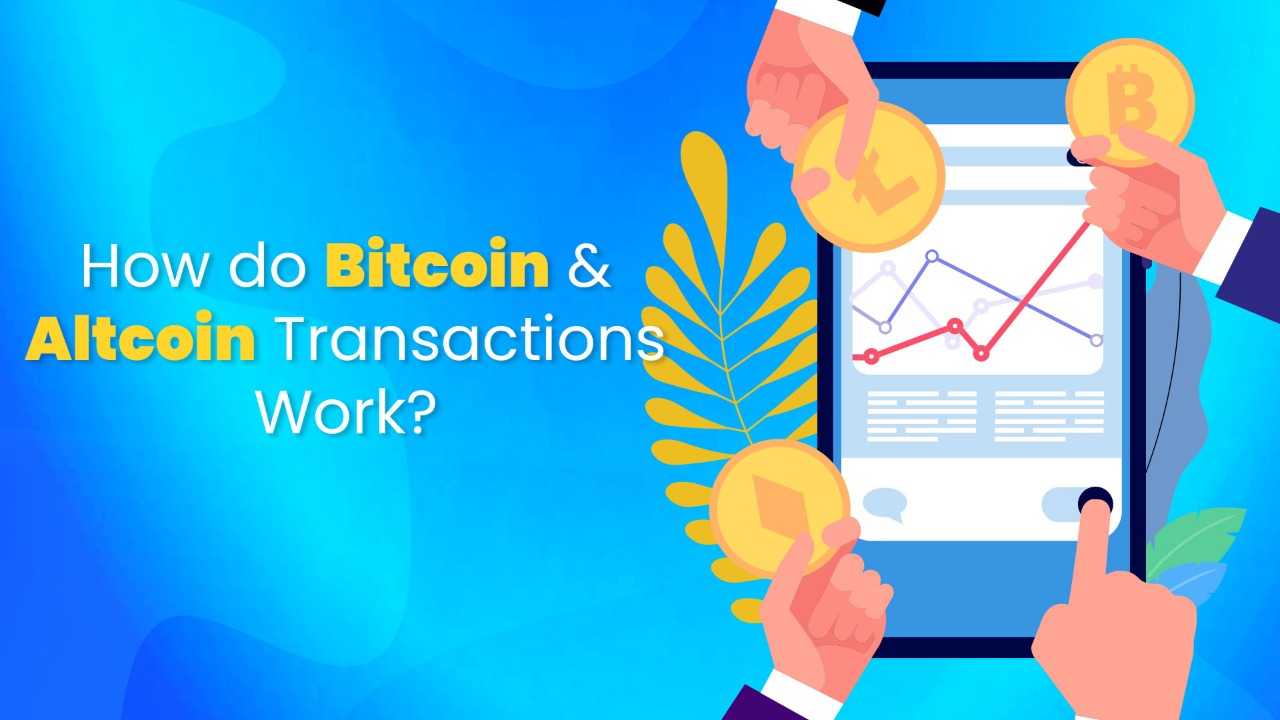 How do Bitcoin and Altcoin Transactions Work?

How do Bitcoin and Altcoin Transactions Work?

You’ve likely heard that cryptocurrencies provide a faster, easier and cheaper way to send money overseas. While this is true, what many people don’t necessarily know is how this is true. In this article we’re going to be fleshing out exactly how Bitcoin and altcoin transactions work, and how you can easily tap into this modern day phenomenon.

What Is Bitcoin, And What Are Altcoins?

If you’re new around here, let’s get you up to speed. Bitcoin was first introduced to the world through a whitepaper in 2008 by an anonymous entity by the name of Satoshi Nakamoto (to this day their identity remains a mystery). Following the global financial crisis, Nakamoto wanted to create a currency that was free from banks and governments, instead putting financial power back into the hands of the people.

Using blockchain technology, Bitcoin was able to facilitate the peer to peer transfer of value, allowing users to make global payments at a much faster and cheaper rate than ever before. While it took a few years for Bitcoin to enter the mainstream market, during this time a number of alternative cryptocurrencies were created. In the early days, any alternative cryptocurrency was referred to as an altcoin (alternative coin to Bitcoin), while this notion has stuck, the altcoin market has grown into a sizable 9,000+ strong industry.

While many altcoins, like Ethereum and Litecoin, were created using Bitcoin’s blockchain, not all offer the same exact functionality. Each cryptocurrency that comes into existence is designed to solve a “problem” in the market, whether that be linked to data storage, smart contract functionality, faster payments systems, etc.

How Do Bitcoin And Altcoin Transactions Work?

Now that we understand the just of what they are, let’s explore how they work. We’ll use Bitcoin as the prime example. So while bank accounts require lengthy paperwork and administrative tasks, creating a Bitcoin “account” simply requires one to open a wallet. These can be found in different formats, with several options available on the market catered to the user's unique needs. Once you’ve created a wallet, you’ll need to load it with Bitcoin which can be done through an exchange like Tap.

Once you have funds in your account, you will be able to send them to another user on the network (note that Bitcoin can only be sent on the Bitcoin network and Ethereum can only be sent on the Ethereum network). To send funds you will indicate on the app (or through the wallet) how much you’d like to send, enter the recipient’s wallet address and then pay a small network fee for executing the trade.

On the backend your transaction will enter what is known as a mempool, a pool of pending transactions, until it is picked up by a miner. Bitcoin miners are responsible for verifying all transactions on the network, and compete with each other to solve the complex cryptographic puzzle first. The first one to do so is responsible for confirming the next batch of transactions in the mempool and adding them to a block. This block is then added to the blockchain in chronological order to ensure the immutable, transparent qualities of blockchain technology are upheld. Once the block has been added to the blockchain, the miner will receive all the network fees of each transaction verified as well as the block reward to compensate for the time and electricity it took to mine.

Most altcoins work in a similar fashion, however many use different methods of mining (also known as hashing algorithms) but the concept remains much the same. Miners verify the transactions, add them to a block, the block is added to the blockchain and the transaction is executed.

Ready To Tap Into Blockchain Transactions?

Now that you have a better understanding of how Bitcoin and altcoin transactions work, it’s about time you tapped into the seamless world of cryptocurrency transactions provided by Tap Global. Through the app you can buy, sell, store and spend your cryptocurrency and fiat portfolios. The app has integrated technology which ensures that users get the best market prices in real time, whenever executing a buy or sell order. Users can also store their cryptocurrencies on the platform through the bespoke backend technology which ensures the utmost security at all times.