The concept of bull and bear markets is part of simple economics, applicable across all markets including the stock market, and is hardly a phenomenon. For traders who lose money from selling low, this is entirely avoidable should they have paid attention to the trading patterns and market volatility.

There’s an old saying regarding trading that is equally applicable to the crypto markets: “it’s not about timing the market, it’s about how much time you spend in the market”.

With a painful bear market ahead, many investors are feeling down on their luck. It’s worth noting that you’ve only lost money if you sell your crypto assets in a bear market. If you continue to hodl, and not liquidate your crypto, their value will increase as the bear market evolves into a bull market. As has happened time and time again, even a portfolio manager will confirm this.

Bear markets are the result of market downturns and a strong indication that market sentiment is low. The current bear market we’re moving through is not the first, nor the worst, witnessed in the crypto history books. Below we observe the worst bear markets to date.

In 2011, Bitcoin rose from $2 to roughly $32, making it synonymous in value with an ounce of silver. Then the bottom dropped out. On June 19, Mt. Gox, the world's largest Bitcoin exchange, announced that hackers had broken into several accounts and stolen millions of dollars in Bitcoins. The value of a Bitcoin plummeted to one cent in a day.

In August 2012, the community discovered that a classic Ponzi scheme had been defrauding Bitcoin investors for months. By fraud, the perpetrator had taken 700,000 Bitcoins and promised incredible monthly interest of 7% over a two-year period.

In 2013, Bitcoin became a victim of its own popularity. As investors rushed to the exciting new opportunity that was sweeping through the media, Bitcoin lost out. Trading activity was so high that Mt. Gox could not keep up, and when it fell apart, hackers took advantage of the breach. Mt. Gox's collapse resulted in the Bitcoin price plummeting from $260 to $50.

When China banned Bitcoin at the end of 2013, its value plummeted by half in a matter of minutes. With authorities still imposing fresh constraints on a regular basis, China's relationship with cryptocurrencies remains turbulent.

In 2017, Bitcoin had a spectacular year, smashing all of its own records and reaching a peak of $20,000. Then, on December 27th, everything collapsed as speculators sold off and cashed in, bringing the price down to $12,000. Throughout 2018 the price continued to drop due to hacks in South Korea and Japan, further fuelled by rumours that these two countries were going to ban Bitcoin entirely.

Cryptocurrencies were not spared from the effects of the pandemic on global markets. Bitcoin was hit particularly hard, losing 50% of its value in just 2 days. From trading above $10,000 in February the price dropped to under $4,000 in March.

In April in a bull market, one Bitcoin was valued at almost $64,000. Then, in a single week, the crypto market lost $1 trillion. Investors fled when major hacks in South Korea and Japan occurred as well as rumors that both governments were readying to ban Bitcoin.

Tesla CEO, Elon Musk went back on his decision to include Bitcoin as a payment option for the company. Then came the news that China was cracking down on cryptocurrencies again. Finally, the environmental impact of Bitcoin mining was brought to light, leaving crypto investors in a familiar position: at the mercy of external forces beyond their control.

Many new investors are afraid of a potential bear market, but those who have witnessed many market cycles and have some experience behind them are steeling themselves for a buying frenzy. In fact, contrary to popular belief, a bear market generally provides some of the greatest purchasing opportunities.

Cryptocurrencies are extremely volatile, which both benefits and hinders investors. They're also susceptible to waves of FUD and FOMO, which may cause unpredictable price changes, periods of cascading loss, and moments of incomprehensible growth.

Cryptocurrency trading is not particularly difficult, but spotting and capitalizing on market structure trends and the accompanying volatile market fluctuations can be a challenge.

A bear market, on the other hand, can be frightening to new traders. After all, no one likes the prospect of potentially significant losses in investments, even if these losses are usually short-term if the investment survives the bear market.

How To Be A Bull In This Bear Market

Following a trying few months of rising consumer prices, rising inflation, crashing stock prices, and geopolitics playing havoc on oil stocks and energy stocks, portfolio value is at an all-time low. According to an article on CNN Business, Keith Lerner, chief market strategist for Truist Advisory Services, said that "Even analysts who aren't predicting quite that dramatic a decline believe stocks have room left to fall."

Despite the gloom, market data indicates that the cryptocurrency market appears to be recovering. While big increases are yet to be witnessed, there are several reasons to be hopeful about crypto once the worst is over. Remember, bear markets are healthy and common occurrences.

Unlike fiat currencies, cryptocurrencies not only represent the expansion of the blockchain ecosystem that backs them, but they also give users control over them in a manner comparable to stock, as well as a variety of features and security that fiat currencies can't.

Cardano, Polkadot, and Solana are among the most significant initiatives in the space, and all of them are scheduled for an upgrade in the near future. These upgrades, which are set to be released this year, aim to increase adoption.

Ethereum, the second-largest blockchain network, is also working on a major network upgrade, a transition from Proof of Work to Proof of Stake.

Crypto's Effect on the Environment Being Addressed

Concerns about the environmental impact of mining have been a major source of anguish for the crypto sector in recent years. With Ethereum switching to Proof of Stake consensus and groups like the Bitcoin Mining Council forming, sustainable crypto mining seems to be on the way.

Crypto Regulation is on the Rise

All of this goes to show how worldwide regulators have become more open-minded when it comes to integrating cryptocurrencies into the greater financial landscape.

Despite the regulatory frameworks still being constructed, the cryptocurrency and blockchain sector is growing. Necessary financial architecture is being established, while institutional-grade custodial services are becoming more accessible to investors. Professionals and individuals are increasingly gaining access to the technologies they need to manage and safeguard their crypto assets.

Institutional investment took off in late 2020 with the pioneer of the movement, MicroStrategy, acquiring 129,218 BTC by May of this year. While Telsa revoked its decision to accept Bitcoin as a payment option, the company still claims to hold $2 billion worth of Bitcoin.

Platforms like PayPal and Block have incorporated cryptocurrencies into their user-faced products, and crypto futures are gaining in popularity.

The increased rate of adoption is a sign that the cryptocurrency sector is maturing. Both investors and businesses are expressing significant interest in getting direct exposure to cryptocurrencies while believing them to be secure enough to invest significant amounts of money.

Like the Stock Market, the Crypto Market Will Recover

A Bear market is a part of the economic cycle (as is a bull market) and will pass, but while we’re in the midst of one, here are some things you can do to make the most of it:

If you have the means, consider buying the dip. The age-old trading mantra “buy low, sell high” is applicable to a bear market. This might also fall into your long-term investment strategy.

Investors might see a market crash as an indication that it's time to sell, however, in months to follow if the price increases this often proves to be a regrettable decision (as many a previous bull market has proved). Rather focus on hodling, and stay informed.

It's important to remember that cryptocurrency markets are often characterized by movement from the impatient to the patient. On average, those who abandon their bets early or on a whim will lose to traders who follow a well-planned and long-term focused approach.

Bear markets exacerbate the difference, benefiting those who have a strategy and penalizing those who don't. So, in conclusion, a bear market should be more of an opportunity than a difficulty if you are well prepared and don't panic.

Disclaimer: This article is intended for communication purposes only, you should not consider any such information, opinions or other material as financial advice. The information herein does not constitute an offer to sell or the solicitation to purchase/invest in any crypto assets and is not to be taken as a recommendation that any particular investment or trading approach is appropriate for any specific person. There is a possibility of risk in investing in crypto assets and investors are exposed to fluctuations in the crypto asset market. This communication should be read in conjunction with Tap's Terms and Conditions. 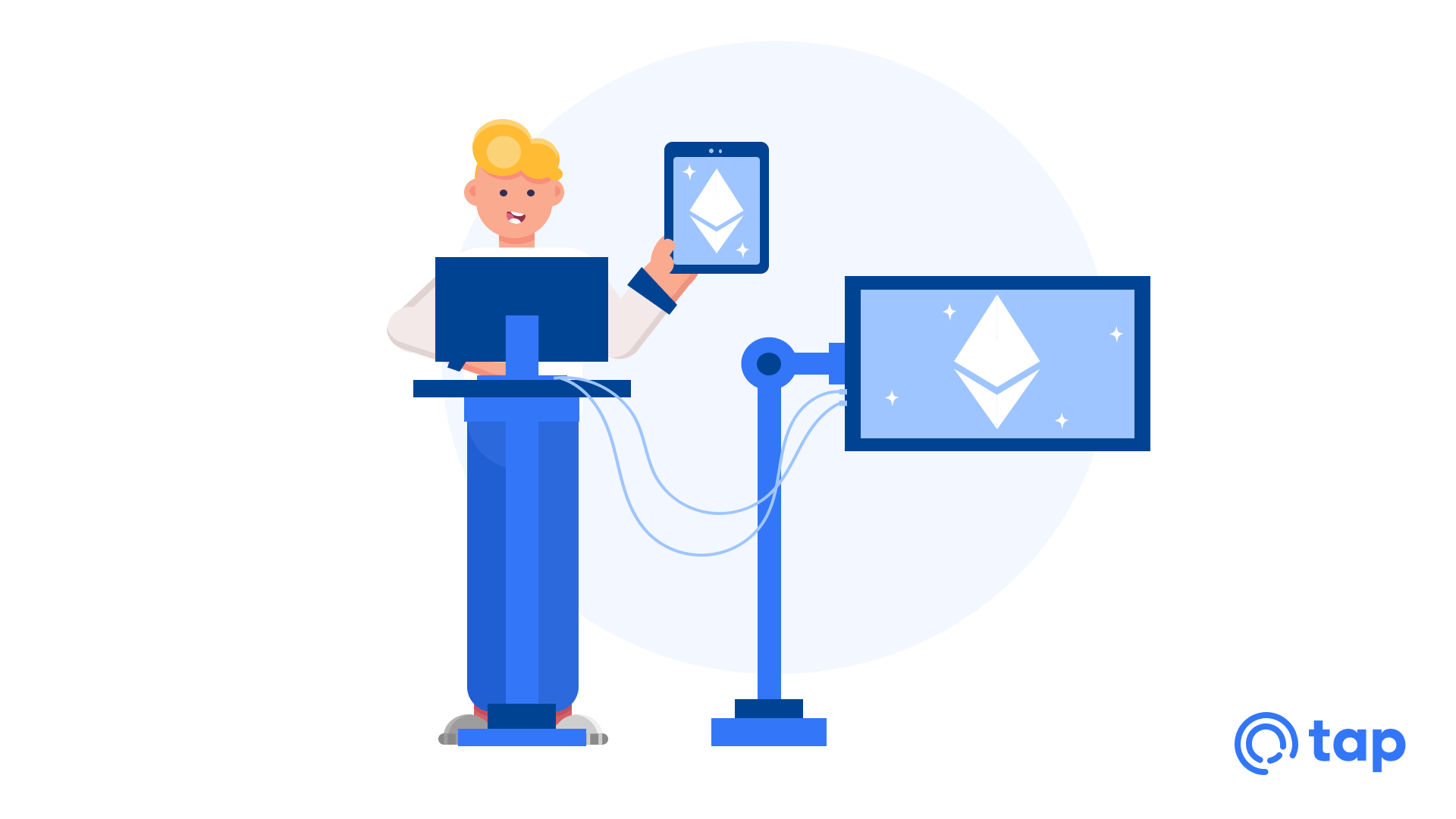 ‍What is Etherscan and what does it do ?

Crypto Lending: How Does It Work ?

Crypto interest | What is P.A. crypto?

The rich text element allows you to create and format headings, paragraphs, blockquotes, images, and video all in one place instead of having to add and format them individually. Just double-click and easily create content.

How to customize formatting for each rich text

Headings, paragraphs, blockquotes, figures, images, and figure captions can all be styled after a class is added to the rich text element using the "When inside of" nested selector system.