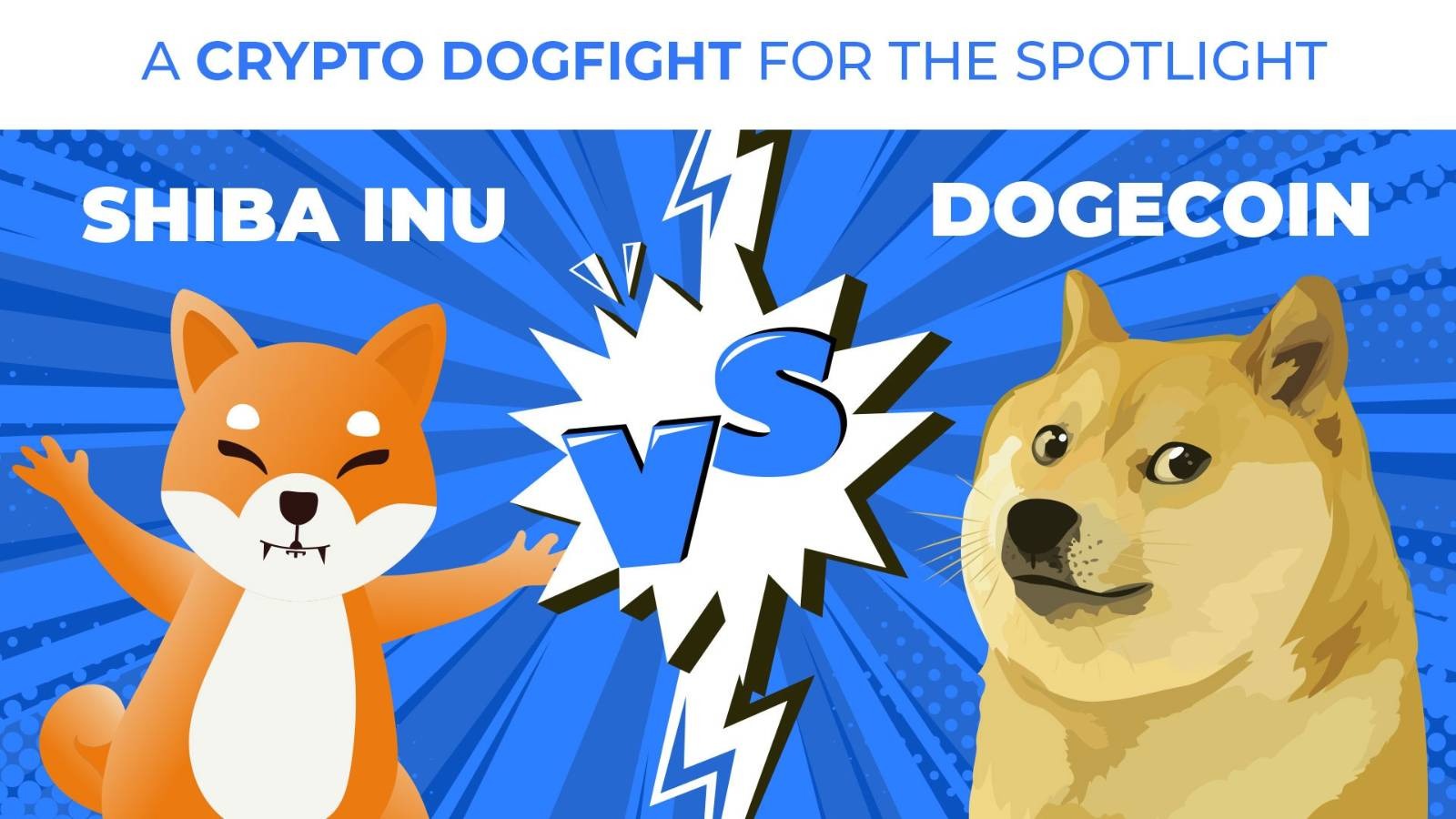 Shiba Inu vs Dogecoin: A Crypto Dogfight In The Spotlight

Shiba Inu (SHIB) and Dogecoin (DOGE) are both dog-themed meme tokens, and ironically both hold a place in the top 15 biggest cryptocurrencies by market cap. Typically meme tokens don't hold too much value when it comes to utility within the crypto space, however, financial experts have pointed out that as the investment thesis has changed surrounding meme tokens these two projects have experienced impressive growth and success. But who comes out on top in this crypto dogfight spurred by internet memes?

Dogecoin calmly entered the crypto scene in 2013 as a joke, based on a Shiba Inu meme that was circulating at the time (a Japanese dog breed). Created by Billy Marcus and Jackson Palmer, the peer-to-peer cryptocurrency was allegedly created to poke fun at crypto investors who understood little about what they were investing in. The coin quickly grew a mass following but did little to prove its value in the space.

However, in 2021 Dogecoin's popularity exploded thanks to social media and the support of Tesla CEO, Elon Musk. After claiming it to be his favourite coin on Twitter, even naming himself the Dogefather, Musk caused a wild increase in the DOGE price, hype, and far-spread interest (as well as speculation).

Dogecoin provides a fast medium of exchange and is used predominately as money for tipping content creators across various platforms and crowdfunding. Ultimately, Dogecoin has a reputation for being an accessible asset in the market.

Bursting on the scene in 2020, Shiba Inu positioned itself as an Ethereum-based rival to the original meme token. The project provides several use cases such as a decentralized exchange, an art incubator and hosts to other tokens (one of which was initially called Doge Killer).

The platform was created by an anonymous entity, much like Bitcoin, that goes by the name of Ryoshi. After launching, Ryoshi donated 50% of the total SHIB supply to Vitalik Buterin, and whether this was meant to be a publicity stunt or not it certainly received a lot of attention. Buterin went on to donate 10% of his SHIB to a Covid relief fund in India and burned the remaining amount.

In October 2021 following a possible Robinhood listing the SHIB price soared and for the first time overtook Dogecoin in value. Once the selling spree calmed down the price corrected.‍

‍
How is Shiba Inu connected to Dogecoin?

While we outline the specifics of their similarities in the article below, the answer to this question is that there is no link between the two. Each network is built on its own platform (Shiba Inu using Ethereum as a base) and are not intertwined nor compatible. They are essentially competitors in the crypto space, each providing a platform and use cases separate from one another.
‍

Both cryptocurrencies currently use a Proof-of-Work consensus algorithm, requiring miners to solve computational problems the fastest in order to validate transactions. Dogecoin is hard forked off the Litecoin network while Shiba Inu is built on top of Ethereum's blockchain. However, in the coming months, this will change as Ethereum moves toward a Proof-of-Stake consensus.

Both these coins have active and loyal followings and have done well to build such strong communities. Both provide easy entry points into the market, an excellent way of diversifying one's portfolio with their low costs. Both coins also played a role in bringing crypto to the mainstream in a "fun" light, with their active community members to thank.

As a bonus similarity, both these meme tokens have greatly benefited from the actions of Elon Musk. While he is a strong fan of Dogecoin, he recently sent the price of Shiba Inu soaring after posting a picture of his Shiba Inu puppy. In part, this contributed to the SHIB price reaching its all-time high.

Of course, while they're both wildly popular and among the biggest cryptocurrencies based on market cap, they too have differences.

While Dogecoin was built on its own blockchain, Shiba Inu was created on Ethereum as an ERC-20 token. This increases the tokens versability as it is compatible with all ERC-20 functions, such as wallets, smart contracts, decentralized exchanges, market places and more.

An important aspect to look at, these two differ substantially. Dogecoin was created to have an infinite supply with a total of 5 billion new DOGE entering the market each year. Due to its fixed reward rate, the coin's inflation rates are expected to decrease over time making it deflationary in the long term.

Shiba Inu, however, has a fixed supply of 1 quadrillion SHIB with around 549 trillion SHIB currently in circulation. The project has also implemented a burning mechanism into its operations, burning small portions of SHIB each time the cryptocurrency is purchased (via the transaction fee). As more coins are purchased the burning mechanism will decrease the supply, making the coin scarcer and increasing value.

Dogecoin is a peer to peer payment system providing a medium of exchange. Shiba Inu on the other hand can be used in smart contracts and DeFi products. The project also provides a decentralized exchange called Shibaswap, as well as two other tokens, LEASH and BONE. On top of that, the platform also offers users access to liquidity pools and staking services.

As mentioned above both these coins have impressive communities behind them and have their own use cases. With many people asking where do experts predict Shiba Inu will go next and how high can Dogecoin go, the truth is that no one can say for certain. Each investor can decide for themselves which is better suited to their trading needs and enter the market accordingly. If you'd like to onboard Dogecoin or Shiba Inu you can do so securely and conveniently through the Tap app today. 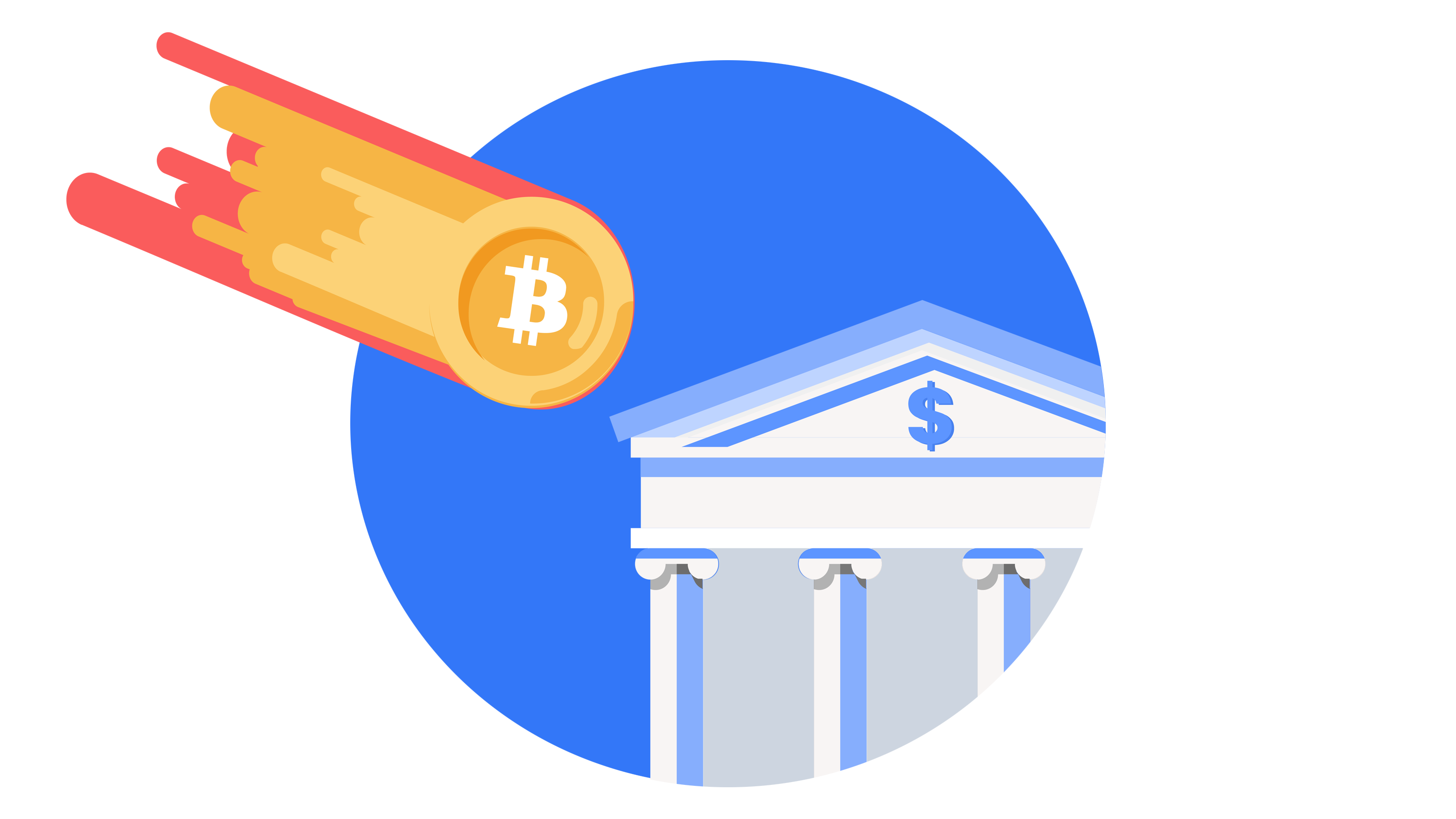 Does the recent cryptocurrency crash pose a threat to the financial system?

Will the recent crypto crash have any effect on the global financial markets and could it be a threat to financial stability? Let’s find out. 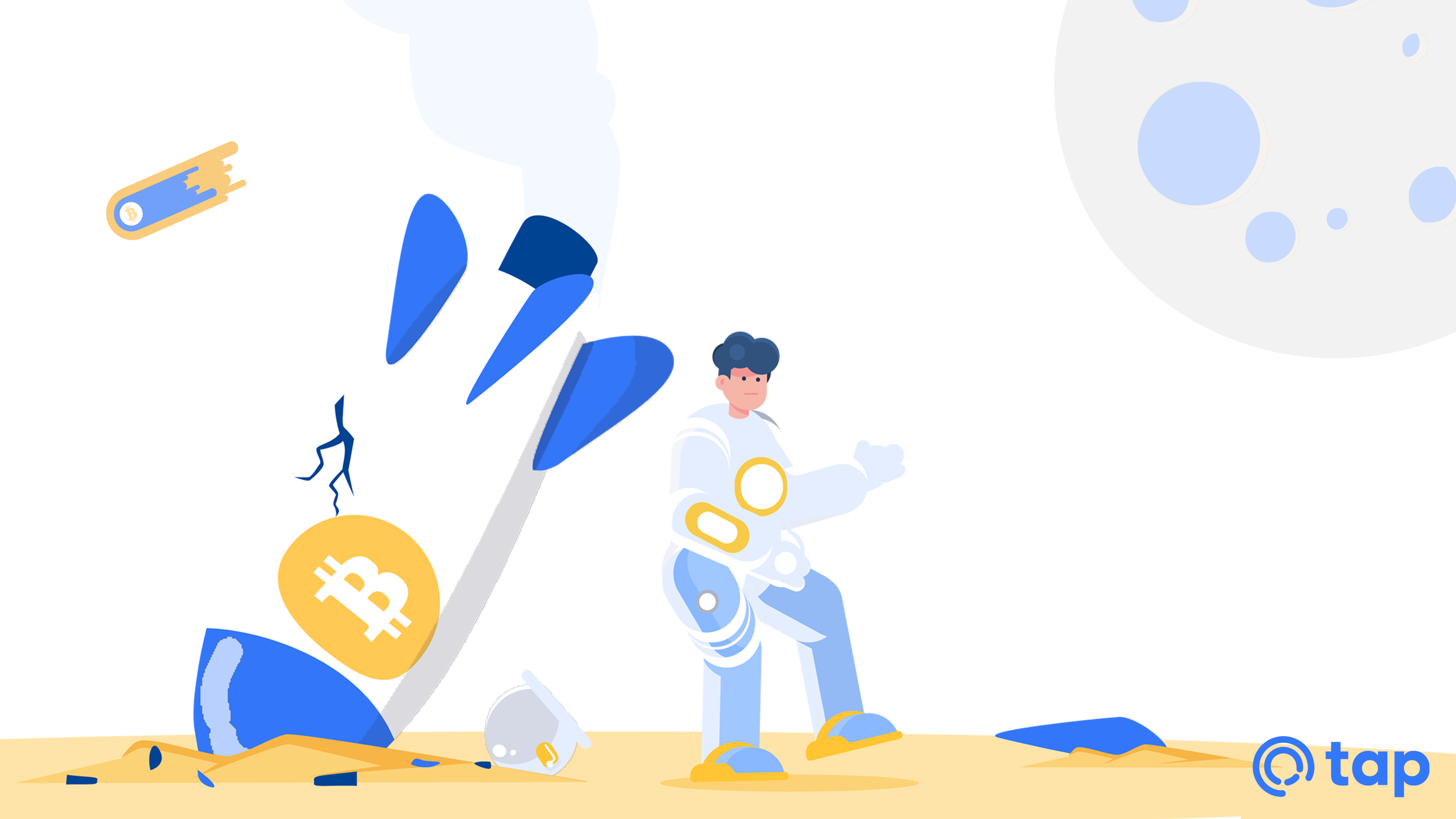 How To Survive The Recent Market Crash

Let's explore why the market is crashing, and what you can do to protect yourself over these turbulent market conditions 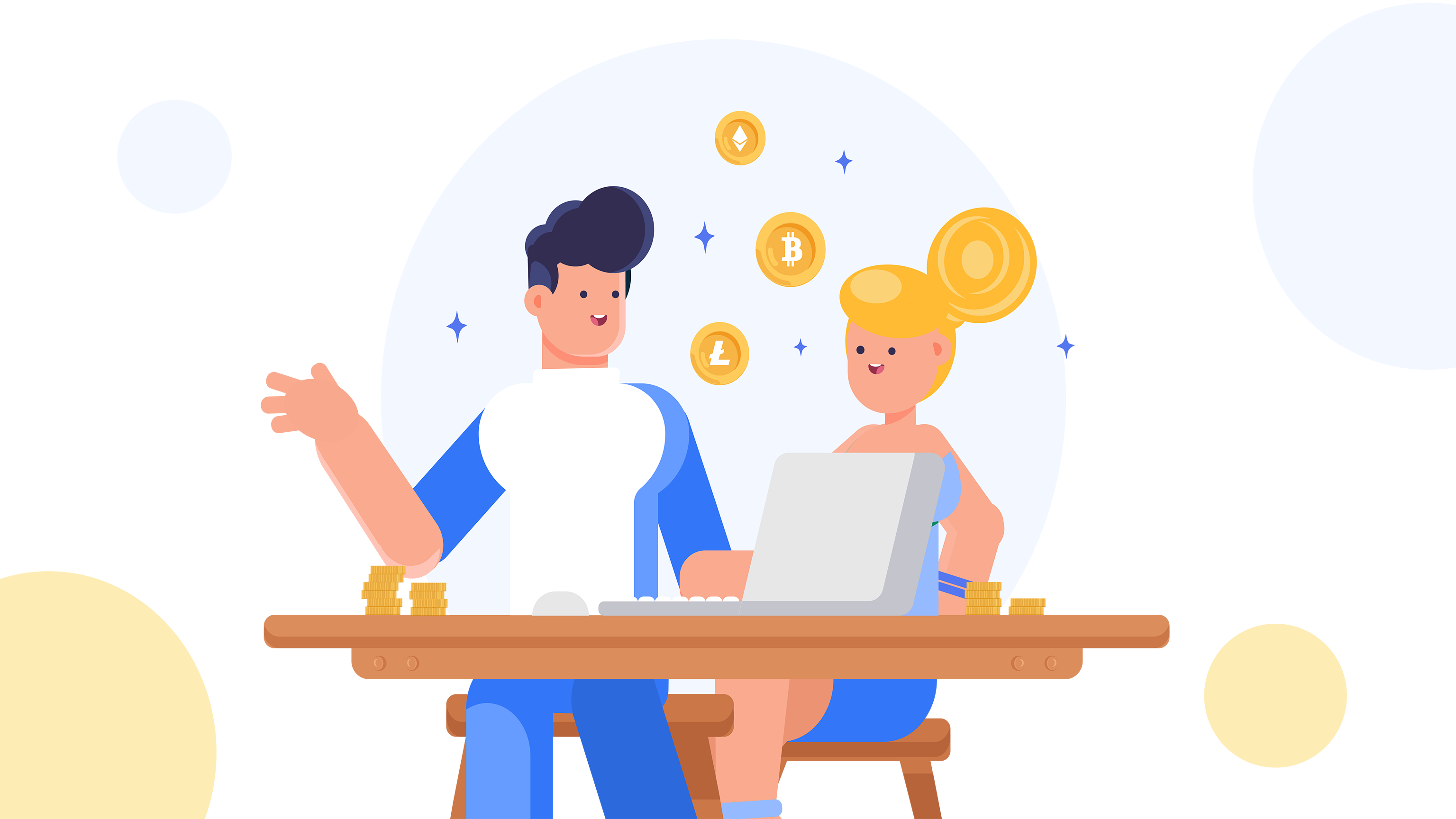 Why You Should Consider Getting Paid with Cryptocurrencies

If you’ve decided to take the plunge, here is why and how to get paid in crypto.